Observations have long shown that convection in the tropics tends to be trimodal, including shallow cumulus clouds (cumulus humilis or mediocris with tops up to 2 km), congestus clouds (with tops up to the freezing level) and deep cumulonimbus (up to the tropopause). Shallow cumuli dominate the subtropics and tropics, and currently receive much attention for their role in cloud feedbacks and climate change . But observations show that episodes of shallow cumuli alternate with episodes of deeper cumulus congestus, which have a much higher propensity to precipitate.

Below figure: a schematic of the two-column model framework. The SST of the rightmost column has been lowered, and convection over the colder ocean has collapsed. A circulating equilibrium between the two columns has been established, with mean ascent over the warm ocean and mean descent over the cold ocean. 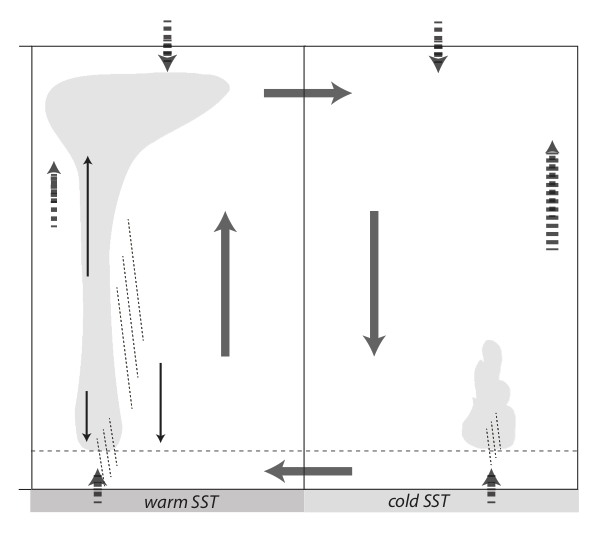 Nuijens, L. & Emanuel, K. (2018): Shallow cumulus and congestus modes in circulating equilibria of the tropical atmosphere in a two-column model. Quarterly Journal of the Royal Meteorological Society.[link]
Contact us