To study the causality behind relationships between clouds and wind in tropical and midlatitude weather systems, CloudBrake combines high-resolution modeling with the analysis of measurements from ground and from aircraft. New lidar techniques aboard aircraft are exploited to collect high-resolution wind profiles and turbulence data, and to validate low-level winds measured by the wind lidar aboard ESA's Aeolus satellite, launched in 2018. By combining Aeolus data with space-borne remote sensing of clouds and rain, we can trace evidence of a coupling between winds and clouds on global scales. New insights obtained by CloudBrake will be used to constrain models of momentum transport by shallow convection, and the impact of momentum transport on circulations will be tested in a general circulation model. Read more about the research strategy and the scientific background below. 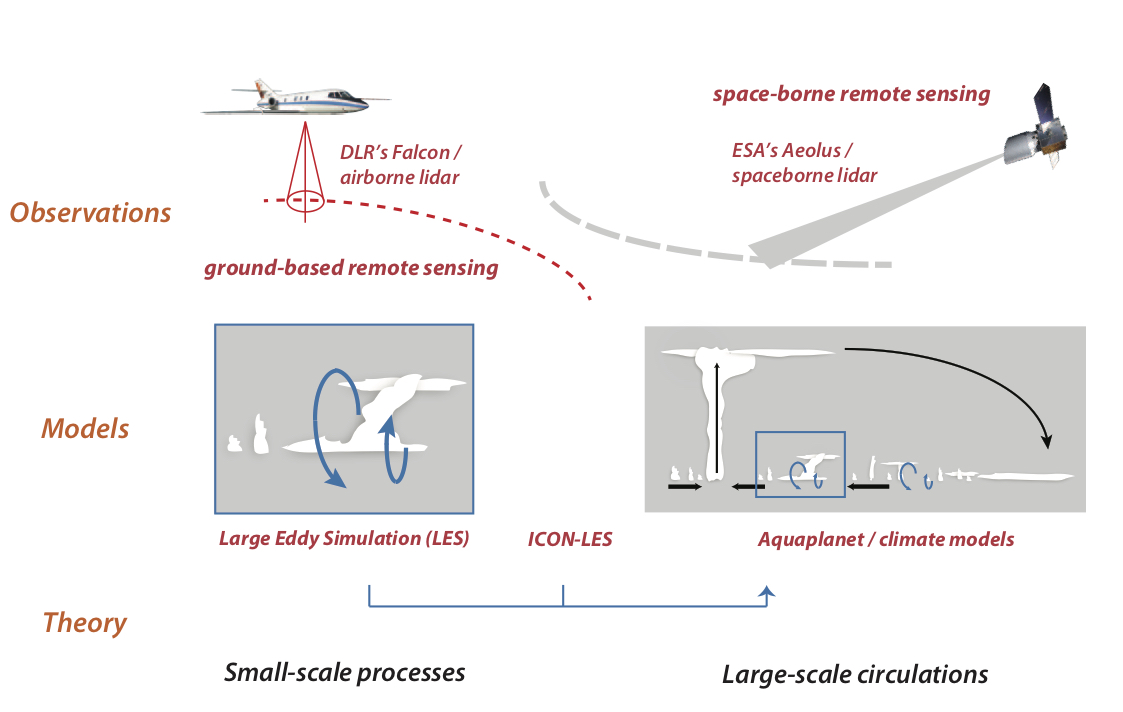 3. Conceptualization: Constraints and boundaries on the influence of convective momentum transport on the momentum budget are evaluated using high resolution simulations in idealized settings (LES) and high resolution simulations in realistic settings (hind-casts over the tropical Atlantic and LES run in forecast modes). Existing treatments of momentum transport by cumulus parameterizations are re-examined.

4. Large-scale circulation: In collaboration with climate modeling institutes and NWP centers general circulation models are used to study the influence of different representations of convective momentum transport on wind patterns and the large-scale circulation As an outlook, this can be explored in more complex settings in CMIP models. Satellite remote sensing (including Aeolus) will be used to look for traces of interactions between shallow cumuli and large-scale winds in phases of strong and weak circulations (ENSO).

For many centuries clouds have informed us how and where the winds are blowing. Even today, satellite observations of clouds are assimilated in numerical weather prediction models to improve the prediction of wind patterns. But clouds may not just simply drift along with the mean wind: they can modulate winds themselves. One way to do so is by transporting air with a certain momentum (wind speed) away from the surface to higher levels in the atmosphere, and transporting air with a different momentum from higher levels to the surface. This vertical mixing of clouds can influence the vertical profile of wind, and CloudBrake postulates that this process is critical for larger-scale circulations (Fig. 1).

The focus of CloudBrake is on shallow convective clouds. Momentum transport by shallow clouds is studied even less than that for deeper clouds, yet shallow clouds dominate the subtropical and tropical oceans (between 5º - 30º north and south of the Equator) in regions that are known for their strong near-surface easterly winds: the trades. The trade-winds are important because they define convergence patterns in the tropics, where the ascending branch of the Hadley circulation produces the majority of tropical rainfall (Fig. 1). Furthermore, the trade-winds modulate ocean currents and upwelling, sea surface temperatures and turbulent fluxes at the ocean surface. Because the trade-winds are not only strong, but also relatively steady, they have a large (unexploited) wind energy potential. Shallow clouds are also frequent in the mid-latitudes as part of storm systems (frontal systems and cold air outbreaks) or during fair-weather conditions (spring and summer days).

The coupling of clouds to winds (circulations) has been highlighted by the World Climate Research Program as a Grand Challenge for developing a better understanding of the Earth System and its sensitivity to global warming. This coupling may occur through the interactions of clouds with temperature, moisture and radiative fluxes, but also more directly through momentum transport. The goal of CloudBrake is to better understand such dynamical motions that also define convection and clouds, and which have received relatively little attention since pioneering studies in the trades, in which clouds were always viewed in light of changes in the profile of horizontal wind (Fig.2).

Figure 1: Clouds and momentum transport within the large-scale overturning circulation

Illustration of the large-scale overturning Hadley circulation and its clouds along a typical trade-wind trajectory. The black arrows indicate the profile of wind with easterlies within the cloud layer, and westerlies above. The blue arrows illustrate convective momentum transport (CMT).

Figure 2: An illustration of the simultaneous evolution of winds and clouds in the trades

Joanne Malkus and her colleagues were among the first to study how cloud patterns within the trades evolved over longer periods of time. Most illustrations in Malkus' published work showed the simultaneous evolution of clouds and the horizontal wind.